I was starting to think my fridge and freezer would never be rid of Christmas leftovers, but by the start of this week I had managed to use everything but half a fruit cake and 6 fruit mince pies.

Inspired by K's Xmas Pudding Ice Cream from In the Mood for Noodles and figuring that mice pies are really not too dissimilar to using biscuits and a fruit mix, I turned the leftover fruit mince pies into fruit mince pie ice cream. Given that I cheated and used leftover vanilla ice cream rather than making my own ice cream base I was fully prepared for it to be a total failure in food experimentation but it worked really well. 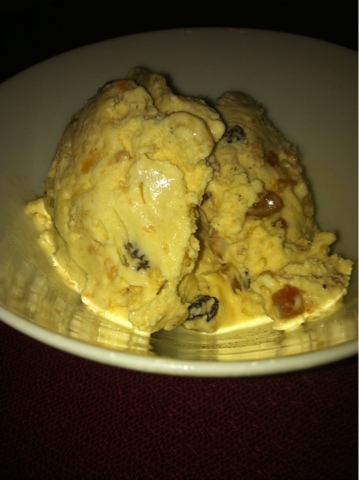 I'm not much of a fan of fruit mince pies but in ice cream I actually enjoyed them. Everything is better with ice cream.
Posted by Katie Carrot at 6:54 PM

Other blogs you should check out